Learn more about our experimental feature, Terror Zones—new, deadly areas in Diablo II: Resurrected that surge with demonic energy, and more coming in our PTR 2.5 test.

Update on September 15: Content changes have gone live for the PTR 2.5 testing period. These changes are indicated in red text. The PTR will end on September 19 at 10:00 a.m. PDT.


Our next testing period, PTR 2.5, goes live on August 25 at 10 a.m. PDT. We’re excited to share that for this PTR we will be debuting Terror Zones—an experimental feature—and introducing a variety of bug fixes to address feedback the community has provided us.


The flames of the Burning Hells have forecasted the future, hero: Ladder Season Two will begin on October 6. Additional details on Ladder Season Two, including launch timing, will be communicated in an upcoming Diablo II: Resurrected blog. We cannot wait for players to begin the race to collect loads of experience and loot while slaying demons and climbing the leaderboard!


The following zones can no longer become terrorized:


The Act I: Black Marsh zone was accidentally added to the list of terrorized zones and has been removed. This zone was never able to be terrorized. We apologize for any confusion.

In Hell difficulty, many monsters receive resistance to specific damage types. If their resistance increases above 100%, that monster is then immune to a specific damage type. Because there are only a handful of ways to reduce a monster’s immunity, only a minute portion of hero builds can successfully farm all zones in Diablo II: Resurrected. We realize that this can create scenarios where certain builds are unable to take full advantage of the current Terror Zone, thus missing out on the experience gains, and most importantly, the fun of these zones.


To promote increased class build diversity, we are introducing six new Unique Grand Charms that allow the player to break specific monster immunity types while the charm is in their inventory.


You’ll notice a new keyword below called Sunder. This keyword means that if a monster has immunity to a specific damage type, their resistance will be reduced to 95% regardless of what their starting resistance percentage was—breaking their immunity and allowing damage of that type to be dealt to them. Sunder is applied before other resistance reducing modifiers and only affects non-players. These new unique charms will only drop from Terrorized monsters of Champion, Unique, Superunique, or Boss difficulty. There is one tradeoff the comes with the new Unique Grand Charms—while they reduce a monster’s resistance, they also reduce your resistance to the same element, allowing you to receive more damage of that type. During the PTR, Sundering Charms will not drop from monsters and can only be tested through the PTR character templates mentioned later in the blog.

The Crack of the Heavens​

Learn more about our experimental feature, Terror Zones—new, deadly areas in Diablo II: Resurrected that surge with demonic energy, and more coming in our PTR 2.5 test. 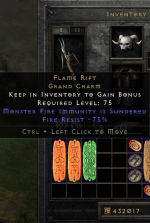 Coldsorc wird lächerlich werden. Back to Mono it is.